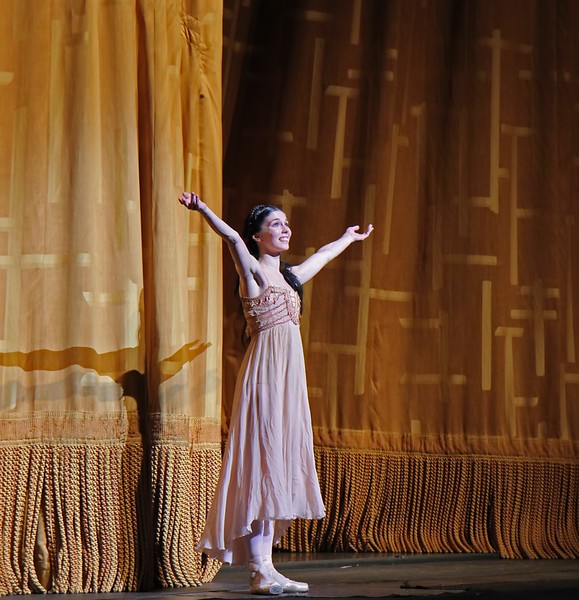 I thoroughly enjoyed ABT’s Romeo and Juliet on Friday, June 14 with Natalia Osipova as Juliet, David Hallberg as Romeo, Jared Matthews as Mercutio, Joseph Gorak as Benvolio, and Patrick Ogle as Tybalt. I haven’t seen Osipova in a dramatic role before and was impressed by her portrayal of the evolution of Juliet; in Act 1 Scene 2 she is a young, playful, immature little girl who gasps in amazement when the nurse points out her developing physique. Fast forward to Act III Scene 1. This is a particularly heavy scene as she refuses to marry Paris (Sascha Radetsky). She does a bourrée quickly away from him, much to the displeasure of her parents that threaten to disown her. In Osipova, there are traces of Giselle’s mad scene as the tension mounts as she rejects Paris and faces the severe consequences.

Hallberg portrays a playful, rebellious young man thoroughly transformed by his love of Juliet. He was in tune with MacMillan’s vision of Romeo as a young man swept off his feet by love, dancing in dizzy exultation. As usual, his dancing was solid and always in character, showcasing his long line and perfectly arched feet. Although a dramatic ballet, it has a number of technical elements that maintain my interest such as Hallberg’s nice double sauté de basque diagonal repeated effortlessly four times. The balcony scene pas de deux was intense and dramatic as the young lovers celebrate their union with reckless abandon. Osipova is criticized for her excessive expressiveness (mugging it up); I did not detect this trait and thought her portrayal of Juliet was always in character.

I was particularly impressed with Jared Matthews as Mercutio and Joseph Gorak as Benvolio. After seeing Gorak in Drink to Me Only With Thine Eyes earlier this season, I asked the woman next to me “Who is that guy?” He has nice extension and turns and I ended up watching him more than the others in the Pas de trois. I liked Matthews as Mercutio more than his Conrad in Le Corsaire. His assemble combination, split jump over Hallberg’s head in the party scene, and turns with an indifferent wobble of the head were particularly notable Friday night. His dying Mercutio was performed well; it must be difficult to dance proficiently while portraying a dying person running out of breath and energy.

It was a packed Met Opera house Friday night without any empty seats in the orchestra. The dancers received multiple enthusiastic curtain calls.

Kenneth MacMillan’s version of Romeo and Juliet was first performed by The Royal Ballet in 1965 and entered ABT's repertory in 1985. According to a website by MacMillian’s estate, MacMillan had wanted to create his own Romeo and Juliet after seeing John Cranko’s version for the Stuttgart Ballet. Lynn Seymour performed the role of Juliet in 1964 and MacMillan choreographed the balcony scene for her and Christopher Gable to perform on Canadian television. The Royal Ballet wanted a new three-act ballet to commemorate the 400th anniversary of Shakespeare; The Royal Ballet artistic director Frederick Ashton contracted MacMillan to complete the ballet in less than five months to include on its 1965 American tour. This was MacMillan’s first three-act ballet.

MacMillan first choreographed the key pas de deux in each act, which was the starting point which the rest of the ballet would be built. MacMillan, Seymour, and Gable worked on the characters in the ballet. MacMillan and Seymour created a headstrong, passionate Juliet who makes many of the key decisions such as the secret marriage, taking Friar Lawrence’s potion, and joining Romeo in death. Gable’s Romeo was a young man swept off his feet by love, dancing in dizzy exultation according to the website.

The website says that MacMillan avoided virtuoso steps because he thought they were too conventionally balletic. Only Juliet and her girlfriends are on point and their choreography is contrasted with character dances and crowd scenes. “MacMillan broke the ballet conventions of the time by having the dancing evolve from naturalistic action. Unlike Cranko’s production, there are no picturesque poses for applause at the end of set pieces. Unlike the Bolshoi production, there are no spotlit entrances for the leading characters: Romeo is discovered in semi-darkness at the start of the ballet as Rosaline’s anonymous suitor; Juliet’s arrival at the ball in her honour goes unnoticed at first.” I note this last point because I can’t remember Osipova’s entrance Friday evening.

At the end of the ballet, there is no reconciliation of the Montagues and Capulets in the manner that Shakespeare ended his tragedy.

Margot Fonteyn and Rudolf Nureyev starred in the premier, which had 43 curtain calls. The safety curtain was brought down to persuade the audience to leave. Fonteyn and Nureyev performed in the premier because they were a bigger draw than Seymour and Gable. The ballet received rave reviews. The pair went on to perform in the U.S. tour and film of the ballet. It is interesting to note that the late former ABT ballet mistress Georgina Parkinson was in the original cast.

Romeo and Juliet is the signature work of The Royal Ballet’s repertoire. During his lifetime, MacMillan staged the ballet for The Royal Swedish Ballet in 1971, ABT in 1985, and Birmingham Royal Ballet in 1992.