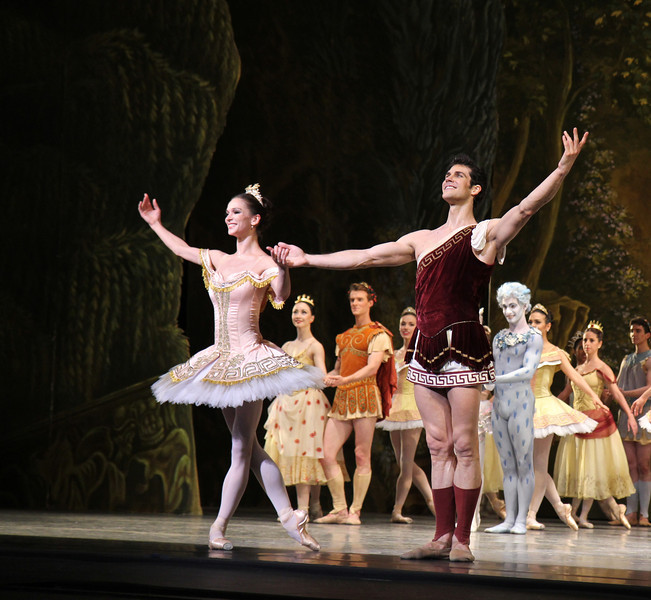 Frederick Ashton of The Royal Ballet created the ballet in 1952 as a star vehicle for Margot Fonteyn and was performed until 1965. Léo Delibes' score is beautiful, a masterpiece of 19th-century ballet music. Tchaikovsky was so impressed with it that he once observed: "Had I known Sylvia existed, I would not have dared compose Swan Lake!"

A problem arose when The Royal Ballet and ABT agreed to co-produce the revival of Sylvia: the choreography was never notated and the only record was a poorly lit black and white film. Christopher Newton, ballet master under Ashton who danced Sylvia during the 1950s kept handwritten notes of the choreography and reconstructed the some of the steps from memory. In addition, costume designs were found in The Royal Ballet’s archives in a mislabeled box along with paintings and photographic records of the original sets. The World Premier of the revival of Sylvia was given by The Royal Ballet in 2004 while ABT debuted its version in 2005. See the ABT website for more detail.

ABT’s star power was on full display in Friday night’s Sylvia with Polina Semionova and Roberto Bolle leading the cast. Semionova along with tennis star Novak Djokovic appear in UNIQLO AIRism underwear advertisements that appear in New York City subway trains (here is a video advertisement featuring Polina). Roberto is one of ballet’s biggest stars. He has a huge international following as evidenced by his over 100,000 followers on Twitter.

Polina was Sylvia, a very demanding role both dramatically and technically. She is onstage almost throughout the performance with several very tiring solos. Sylvia is difficult dramatically as she must run the gamut of roles: she is a powerful leader of an Amazonian tribe; a woman who morns the loss of Aminta after she shoots him with an arrow; a seductress of Orion in an effort to gain her freedom; and finally a woman who falls in lover with Aminta. Polina danced well, except for a diagonal jumping and pirouette section in Act I that seemed a bit off the music. Her solos were beautiful, taking full advantage of her long flowing arms.

Bolle was the Aminta the shepherd, who is in love with Sylvia. Roberto was strong and steady throughout, his solos were rock solid without waiver. Technically, he had a nice saute de basque section and had a very nice triple pirouette which finished in releve, pausing a few seconds for effect. His partnering skills are remarkable, showering attention on his beloved Sylvia. Polina and Roberto connected well, particularly when he removes Sylvia’s veil, revealing his true love as he is overcome with emotion. Polina and Roberto make a nice pair, dancing in unison with feeling. Several jumping fish dives were done well and drew applause.

I also noted the corps dancing in Act I of the woodland creatures, an Amazonian tribe dancing in celebration of their hunt. This is a dance of female empowerment with tribe members dancing with bows and arrows: “Don’t mess with us! We rule the forest!” The dancers were in synch in the fouetté section; not an easy task given they are performing the step with a bow in one hand. Also, the lighting in the first set is beautiful, simulating a blue moonlit night that provides illumination for the dancing.

Jared Matthews is Orion, the evil hunter. I have seen Jared perform several times this year and this performance continues his hot streak as he is having a very good season. His two pas de deux with Polina were appropriately awkward and tense as Sylvia is trying to escape.