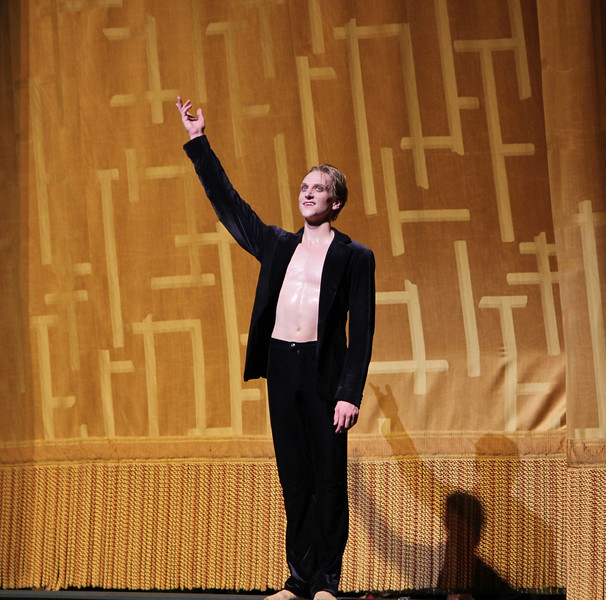 Alexei Ratmansky’s Shostakovich Trilogy is an exciting, complex, multifaceted work with never a dull moment. Trilogy premiered on Friday, May 31, 2013. I saw the premier and the Saturday evening performance, which had the same cast. There is a lot going on in the three pieces and it would be difficult to take in all of the action with just one viewing. I look forward to seeing it in future seasons as even two viewings is not enough to absorb all of the nuances in this fast-paced ballet. Ratmansky’s stage is a busy one, with dancers constantly darting in and out of the action, with changing groups and combinations of dancers.

The work consists of three seemingly unrelated pieces; if they are related, I missed the linkage. The first is Symphony #9, which premiered at City Center in October 2012. The scenery by George Tsypin consists of drawings of World War I-type airplanes, blimps, and people, some carrying red flags. The two performances I saw featured Polina Semionova and Marcelo Gomes, Herman Cornejo, and Simone Messmer and Craig Salstein. Polina and Marcelo are a great pair and perfectly matched-I saw them in Symphony in C earlier in the 2013 season. She is becoming one of my favorites at ABT. There are several lighter moments in their dancing with playful movements, demonstrating a sense of humor from Ratmansky. Herman is incredible; in one notable section he performs multiple entrechat six (six beats), each very clean with clear leg separation on the first two leg crossings (four beats), with an exaggerated separation on the last crossing. Very nice. He continues the beats while jumping to stage right and off the stage. Craig Salstein is very expressive and adds a slightly comedic touch.

The second piece is Chamber Symphony and features David Hallberg-dressed in a jacket with no shirt-as a lost, tormented soul, desperately searching for something. He moves frenetically around the stage sometimes brushing his hair out of his eyes as he tries to connect with Isabella Boyston, Paloma Herrera, and Julie Kent. The program provides no guidance on the story. I talked to someone after the performance; he said that at a rehearsal, Hallberg’s character was disclosed as Shostakovich and the three women represent his three wives. I checked Wikipedia and Shostakovich was married three times. The first marriage had difficulties and ended in divorce. The third marriage was to a much younger woman, "her only defect is that she is 27 years old. In all other respects she is splendid: clever, cheerful, straightforward and very likeable.” I addition, he survived Stalin’s Great Terror while many of his friends and relatives were imprisoned or killed. There are three male dancers dancing in harsh tones, possibly representing threats to Shostakovich from NKVD Soviet Police.

I found the piece interesting, but wanted more background-who are these women and why is Hallberg’s character so frantic and lost? What is he searching for? Not knowing much about Shostakovich, I was a bit lost without any context. Background information in the program such as the detail provided in the rehearsal would have been helpful.

The third piece, Piano Concerto #1, is my favorite and features two couples: Natalia Osipova and Ivan Vasiliev, and Diana Vishneva and Cory Stearns. The dancers' bodies are clearly on display as the males wore unitards (costumes by Keso Deeker) with the females wearing red leotards. Cory and Ivan had greased, slicked-back hair (I didn’t recognize Cory on Friday with that look). The scenery consisted of red objects hung in suspension. Some of the objects reminded me of the Soviet hammer and sickle.

Plenty of non-stop action in this one with the four main dancers appearing in various combinations. Diana and Natalia danced well together and complement each other given their similar physiques. I particularly liked a spectacular double assemble diagonal from Ivan and Cory that drew much applause. Natalia had a grande jete diagonal section in which she seemed to fly.

I loved the Trilogy and want to see it again in future seasons. I generally have a desire to see multiple casts, but was not disappointed to see the same cast in two consecutive nights given the high level of dancing. I couldn’t see many empty seats on either night and the audience seemed to enjoy the performance. I guess that’s why ABT wisely hired Ratmansky in the first place.