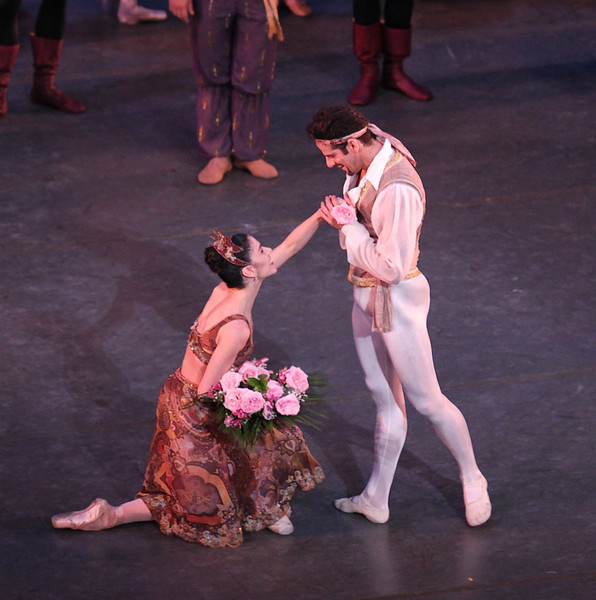 I agree with The New York Times’ dance critic Alastair Macaulay that ABT’s Le Corsaire is frivolous and superficial, with a ridiculous, nonsensical comedic plot. However, unlike Macaulay, I thoroughly enjoy this ballet that showcases ABT’s bravura dancing, having seen it more than dozen times over the past 15 years (Thursday and Friday performances this season).

In Conrad’s hideout, Medora tells Conrad, in the name of their love, to free all of the slave girls. He agrees, but his friend Birbanto (Thursday: Luis Ribagorda, Friday: Joseph Phillips) rebels against the idea and persuades the pirates to riot against Conrad. Conrad fights the pirates and convinces them to give up their mutinous plan. Birbanto’s next scheme is to spray a rose with sleeping potion. Conrad is drugged to sleep. Birbanto attempts to capture Medora. She stabs him with a knife. In the confusion, Lankendem steals Medora back and escapes.

The pasha is happy that Medora has been recaptured and declares that she will be his number one wife. Medora is repulsed. Conrad, Birbanto, and the pirates storm the pasha’s palace and chase away the pasha and his men. Medora then exposes Birbanto as a traitor; Conrad shoots him and then escapes to the ship. On ship, there is a terrible storm. The ship sinks. In the Epilogue, Conrad and Medora cling to a rock and offer “…thanks for their miraculous survival, a testimony to the strength of their love.”

The plot is silly with, as Macaulay notes, no link to the original Byron poem. However, there is a lot of dancing, and depending on the cast, a very high level of dancing with plenty of opportunity to see something exciting. With all this great dancing, why worry about a silly plot?

Regarding the dancing, Cory was a confident and outgoing Conrad Thursday evening, paired with Veronika Part. Cory has had a good season so far. I enjoyed him in the Shostakovich Trilogy in which he held his own with the Russian all-star team of Natalia Osipova, Ivan Vasiliev, and Diana Vishneva. I particularly like his double saute de basques, which have nice air time and horizontal distance from takeoff to landing, and his double assembles, fully on display on a nice diagonal with Vasiliev in Shostakovich (see the ABT ballet dictionary for a description and video of the steps). Marcelo Gomes’ performance Friday night brought a new level of enthusiasm to the role, as his excitement during his bows after his solos in anticipation of Medora clearly showed.

Veronika Part radiated beauty during her barzaar entrance in which Conrad immediately fell in love. She has a long, beautiful, elegant line; a bit off on some of her turns in the first act but she pulled off the demanding fouette series in the second act. Paloma Herrera was in good form as Medora on Friday.

Ali the Slave doesn’t do much in this ballet except for the dance with Medora and Conrad at the opening of the second act. Ivan Vasiliev was amazing on Friday night; if there is a better dancer in this role today, let me know. His dancing style is all-out, full throttle all the way, but with very controlled turns on Friday. His solo was similar to this YouTube clip. Notable are his forever hanging double pas de chat sequence (4:30), a funky step that I can’t begin to describe (4:41), nice controlled turns in attitude (4:54), very unique innovation on his double saute de basques (5:07) in which he shoots out his lead leg in a sweeping motion, 540 trick at 7:53, double assemble sequence at 8:00, and a nice turn sequence with pirouettes a le second followed by four turns in second, finished by multiple controlled turns at 9:07.

I also liked Ivan’s dancing in Shostakovich Trilogy but don’t think his style, gymnast body type, and line mesh well in more classical pieces such as Symphony in C.

James Whiteside was the slave on Thursday night. He is a former Boston Ballet Principal Dancer in his first season at ABT. His solo was a standard version, with very high diagonal split jumps. His pirouettes are very fast with arms tightly wrapped, the opposite of Jose Manuel Carreno. This was the first time I’ve seen him dance. It must be a nerve wracking experience doing the slave for the first time at the Met, but thought he pulled it off.

Corps members Luis Ribagorda (Thursday) and Joseph Phillips (Friday) played the role of Birbanto. Phillips impressed me in the role of the gypsy in Don Quixote and look forward to seeing him again. Nice to see that corps members are getting starring roles at ABT. Blogger Haglund reviews ABT’s Washington Le Corsaire and was particularly impressed with Ribagorda and Phillips.

This year’s production features new costumes by Anaibal Lapiz. I am happy that Lankendem’s old costume that looked like pajamas that my 9-year old would wear has been retired. Macaulay calls the bikini tutus that the slave girls wear his least favorite form of dance apparel. I actually like the look, particularly on Simone Messmer, Luciana Paris, Isabella Boylston (Thursday night), Melanie Hamrick, Kristi Boone, Leann Underwood (Friday night). Any more comments on bikini tutus and I might get into trouble.

Although the orchestra area was full Thursday, audience response was muted during the curtain calls. The Friday cast received a more enthusiastic response.