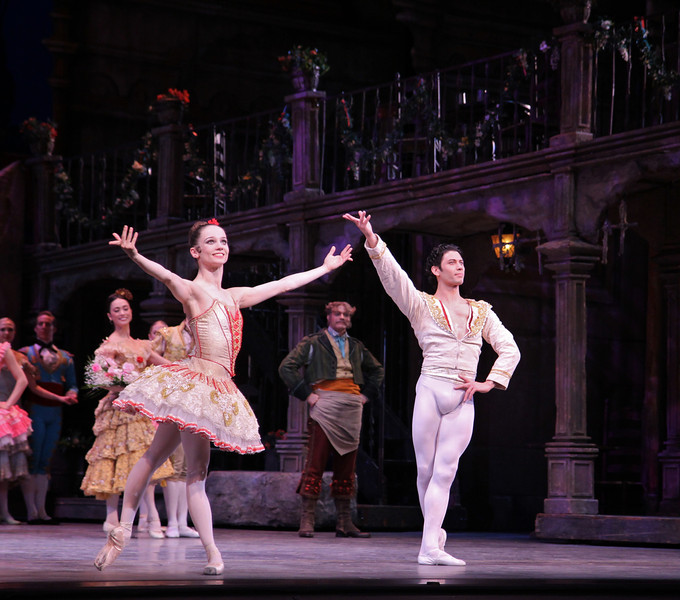 I’m always excited at the beginning of every ABT season, anticipating the great performances that lie ahead. While New York City Ballet presents important choreography from Balanchine and Robbins with dancers as somewhat interchangeable parts, ABT’s Spring Met season is a celebration of individual technical achievement set to ballets that sometimes do not meet the approval of critics (see New York Times reviews from dance critics Alastair Macaulay and Gia Kourlas). ABT’s repertory is fodder for critics complaining of mind numbing “warhorse” ballets fulfilling lowbrow consumer tastes. However, few people care. ABT audiences are not searching for subtle choreographic interpretation or the meaning of life. They’re looking to see bravura dancing at its finest, with the story a backdrop for the dancing.

Full throttle bravura dancing was on display Thursday evening with Herman Cornejo and Maria Kochetkova as leads. Herman is a rare, once-in-a-lifetime talent, a master of his craft at the peak of his powers. The ballet showed off his turning skills as he regularly ripped off 6-7 turns, many with one hand on his hip and some ending in a double tour to the knee. In the second act, he had a nice diagonal consisting of four consecutive double saut de basques. He played an energetic but at times subdued Basilio.

His partner was San Francisco Ballet Principal Dancer Maria Kochetkova. They make a nice pair as he is 5’6 and she stands at 5 feet tall and light as a feather. Her small frame came in handy in the one-handed lifts, where he held her over his head for over five seconds. She had an impressive diagonal of turns in first position, alternating single and double pirouettes. I’ve seen Maria dance several times; once with Herman and the other with San Francisco Ballet. I wasn’t overly impressed as she appeared tense and stiff. However, tonight, she was relaxed and full of vigor.

I really enjoyed her solos in the pas de deux, particularly the fouetté section where she alternated between single and double fouettés as many women do these days. But at the end she added a unique twist, quarter turns in which she would spot to the side, back, other side, and front again, winding it up with a nice double (maybe triple) to the knee.

Herman seemed subdued in his Act III solos, which was a bit of a letdown after great dancing in the first two acts. He did not include his signature monster double cabrioles to the front, opting for a double assemble-type step. Also, straightforward barrel turn jumps at the end of his second solo. His turn section was fine, turns in second with four turns, winding it up with a triple pirouette to a double tour.

Stella Abrera and husband Sascha Radetsky were very effective as Mercedes and Espada. Their expressiveness makes these roles work. During his solo, he turned his head to flirt with a village girl, primped his hair, and flashed a grin to the audience. Stella exuded confidence, even when her matador strayed. Stella had double duty as she also beautifully danced the Queen of the Dryads role in the second act.

Others that stood out were Craig Salstein as the dolt Gamache and Gabe Stone Shayer as the lead Gypsy. Craig added nuances to the role that I have never seen before, providing a new perspective. Gabe handled the tricky parts of the gypsy solo well, with nice pirouettes and three consecutive double tours.