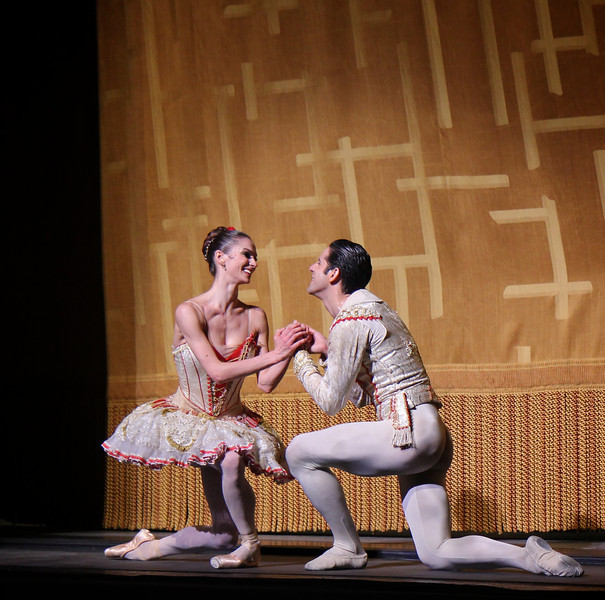 Polina Semionova was stunning as Kitri in Don Quixote Saturday night. If there is a better Kitri in the world today, I would like to see it. She was in control throughout the evening, making the difficult and physically demanding role look easy. Standout technical parts include:

• Endless balances in the Grand Pas de Deux that drew gasps from the crowd. Conductor Ormsby Wilkins had to extend the music, waiting for her to conclude her balance. WOW!!!

• A nice fouetté section in her final solo that alternated single and double pirouettes with one hand on her hip and other hand overhead on the double. The sequence started out with a quadruple pirouette. It takes a lot of guts to start out a difficult turn sequence with four pirouettes. Usually smaller dancers are better turners, but Polina, at 5’9 inches tall, defies that observation.

Polina'a technical achievements reinforced rather than detracted from the story line of the ballet; she was always expressive and in character (at times reminding me of former ABT Principal Dancer Irina Dvorovenko) covering a wide range of emotions from defiance of the dolt Gamache and her father, flirting with Basilio (Marcelo Gomes), disapproval of Basilo’s staying eyes, and the ultimate joy of capturing Basilio’s love.

Marcelo is a great partner and he showered his attention on Polina (except when he was flirting with the village girls). He added nice touches such as “dizzy drunk” pirouettes after imbibing wine offered from a villager and shaking hands with Don Quixote during his solo before starting his coupe jeté section.

The Grand Pas de Deux was stellar with no rough edges. At times, Marcelo used only one hand to support her turns. Why use two hands when one will do? Marcelo was under pressure after Polina’s fouetté section; she confidently turned to him as if to say “Can you beat that?” He came through with steady a la seconde turns punctuated with a triple pirouette.

I need to get out more in the ballet world; I look forward to seeing the Bolshoi and Mikhailovsky Ballet perform Don Quixote in New York later in the year and wonder how anybody can top Polina’s performance.

I enjoyed Hee Seo as Mercedes and Jared Matthews as Espada. Jared, who unfortunately is leaving ABT at the end of the season for Houston Ballet, was a dynamic matador, aggressively spinning his cape on the floor on his entrance. I liked his giant assemble’s in his second act solo, which seemed to cover half the stage.