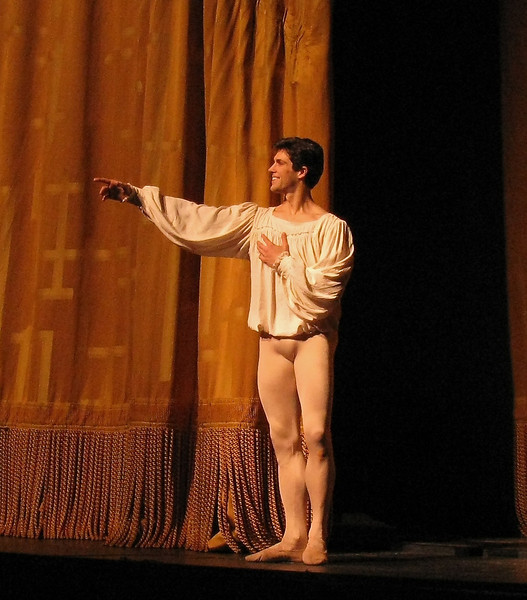 Italian Roberto Bolle is one of ballet’s biggest stars. He has a huge international following as evidenced by his over 90,000 followers on Twitter; photos on his flickr fanclub have attracted about 100,000 views.

Bolle entered the La Scala Theatre Ballet School at age 11. According to his website. Rudolf Nureyev noticed his talent and chose him to interpret a role in the ballet Death in Venice. He joined the Theatre Company in 1994 and was promoted to Principal in 1996 at age 20.

Since then he has become an international superstar, having danced with the Royal ballet, American Ballet Theatre (ABT), the National Ballet of Canada, the Stuttgart Ballet, the Finnish National Ballet, the Staatballett Berlin, the Vienna Staatsoper Ballett, the Staatsoper in Dresden, the Munich Ballet, and the Tokyo Ballet. He has starred in many contemporary and classical ballets such as Sleeping Beauty, Cinderella, Don Quixote, Swan Lake, The Nutcracker, La Bayadère, Giselle, La Sylphide, Manon, Romeo and Juliet, Onegin, and The Merry Widow.

His notable performances include: • In 2000, he opened the season at Covent Garden Opera House in London. • In 2000, he was invited by the Bolshoi Ballet to celebrate Maya Plisetskaya’s 75th birthday in the presence of President Vladimir Putin. • In 2002, Bolle danced on the occasion of Queen Elizabeth’s Golden Jubilee at Buckingham Palace in the presence of the Queen. The event was broadcast live. • In 2004, he danced in front of Pope John Paul II in Saint Peter’s square to celebrate young people’s day. • In 2004, he danced with Alessandra Ferri to celebrate the re-opening of La Scala Theatre after its restoration. • In 2005 at Covent Garden Opera House in London, he danced in Sylvia. The BBC broadcast the performance on Christmas Day. • In 2006, Bolle danced at the opening ceremony of the 2006 Winter Olympic Games in Turin where he performed a solo created for him by Enzo Cosimi. • In 2007 he performed for the first time with ABT as a guest artist, on the occasion of Alessandra Ferri’s farewell performance.

For the 2009 Spring Season at the Metropolitan Opera House in New York, he performed as a Principal Dancer with the American Ballet Theatre. Since December 1998 he has been Resident Guest Artist at La Scala Theatre. During the 2003/2004 season he was promoted to Etoile at La Scala Theatre.

Since 1999 he has been a Goodwill Ambassador for UNICEF and in 2006 he visited Sudan on his first trip into the field.