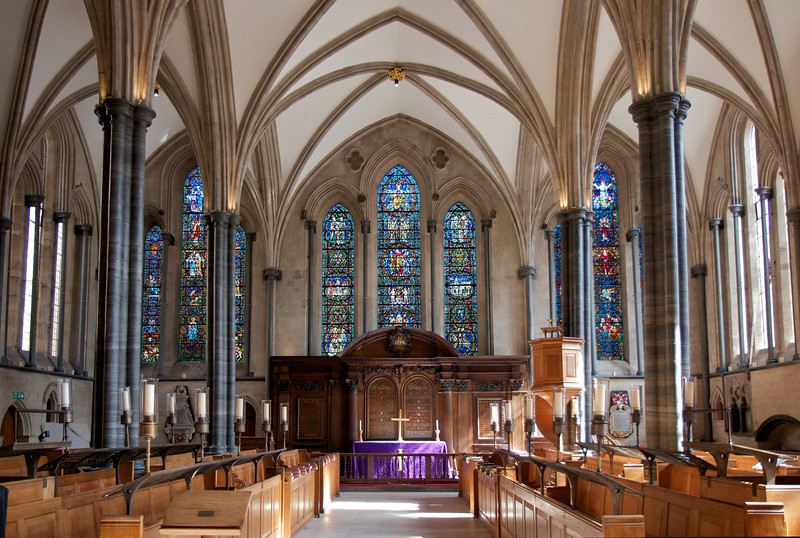 I obtained information on Temple Church from Sacred Destinations which has a nice summary of the history of the church.

The Temple Church is located off Fleet Street near the Temple tube stop in London. The church is one of three existing Norman round churches remaining in England.

The Knights Templar constructed the church, which was consecrated in 1185 in a ceremony that may have included King Henry II. The church is in a large monastic compound that included residences, military training facilities, and recreational grounds, according to Sacred Destinations. The Knights Templar held worship services and secret initiation rights.

“The order of the Knights Templar was very powerful in England in this early period. The Master of the Temple sat in parliament as primus baro (the first baron of the realm). The Temple compound was regularly used as a residence by kings and by legates of the Pope.” it is believed that the round shape of the church was patterned after the Church of the Holy Sepulcher in Jerusalem, where the Knights Templar were responsible for guarding during the Crusades.

The Temple was the scene of negotiations leading to the signing of the Magna Carta in 1215.

The church’s choir was greatly enlarged in the early 1200s when King Henry III expressed a desire to be buried there and a new chancel was consecrated in 1240 in Gothic style. However, Henry changed his mind and was buried in Westminster Abbey.

The power of the Knights Templar waned in the 14th century. Leaders were charged with various crimes and imprisoned in the Tower of London. The Knights of Malta gained control of the property.

Although the Great Fire of London did not touch Temple Church in 1666, it was renovated in a Victorian Gothic style by architectural great Sir Christopher Wren (architect of many churches including Saint Paul’s). Most prominent is a large wooden altar in the chancel designed by Wren including the Ten Commandments written in gold letters with detailed wood carvings.

The church was severely damaged by German incendiary bombs in May 1941 in the Battle of Britain. The roof of the Round Church caught fire and burned wooden parts of the church. Fortunately, the wooden altar was stored in a museum at the time. The church was restored and rededicated in 1958.

The Temple Church was in several literary works. In Part I of Shakespeare’s Henry VI, the church is the scene of the start of the 15th century Wars of the Roses. The war started by the plucking of two roses in the Temple garden. The church appeared in the Da Vinci Code; the lead characters arrive at the church in pursuit of a riddle: After a careful examination of the ten knights, the group learn from the altar boy that there are no tombs in the church, only effigies. In the end, the riddle refers to the tomb of Sir Isaac Newton in Westminster Abbey.