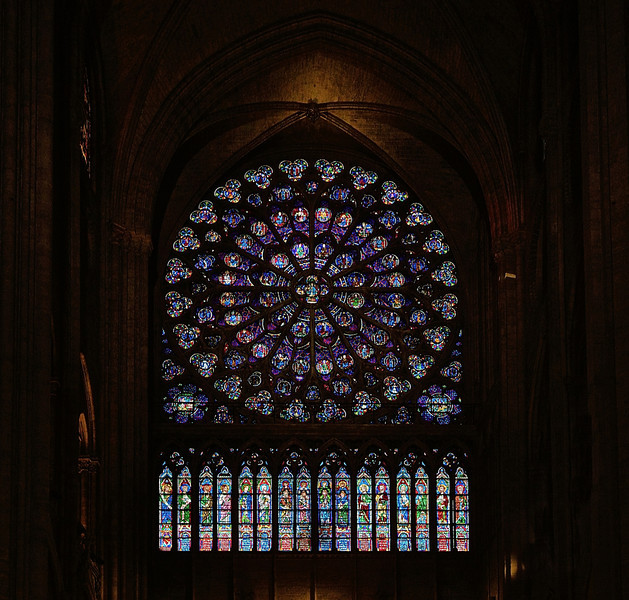 From the Notre Dame website, the South Rose Window was a gift from King Saint Louis and constructed in 1260 as a counterpoint to the North Rose Window constructed in 1250. It is 42 feet (12.9 meters) in diameter. The window, dedicated to the New Testament, has 84 panes radiating out from a central medallion of Christ. From the Notre Dame website, the rose window has been damaged many times over the centuries. After being propped up since 1543 because the masonry had settled, it was restored between 1725 and 1727. However, the work was poorly executed. The window was severely altered in a fire during the 1830 revolution and had to be rebuilt again in 1861 by Viollet-le-Duc.

It is difficult to make out specific scenes from the photo, but the website says that the fourth circle consists of around twenty angels carrying a candle, two crowns and a censer, as well as scenes from the Old and New Testaments (in the third and fourth circles) and nine scenes from the life of Saint Matthew, from the last quarter of the 12th century. From the Notre Dame website: “The architect drew inspiration from Chartres Cathedral, placing the four great prophets (Isaiah, Jeremiah, Ezekiel and Daniel) carrying the four evangelists (Matthew, Mark, Luke and John) on their shoulders, at the centre. This window echoes the reflections of Bertrand, bishop of Chartres in the 13th century, on the connection between the Old and New Testaments: We are all dwarves standing on the shoulders of giants. We see more than they do, not because our vision is clearer there or because we are taller, but because we are lifted up due to their giant scale.”