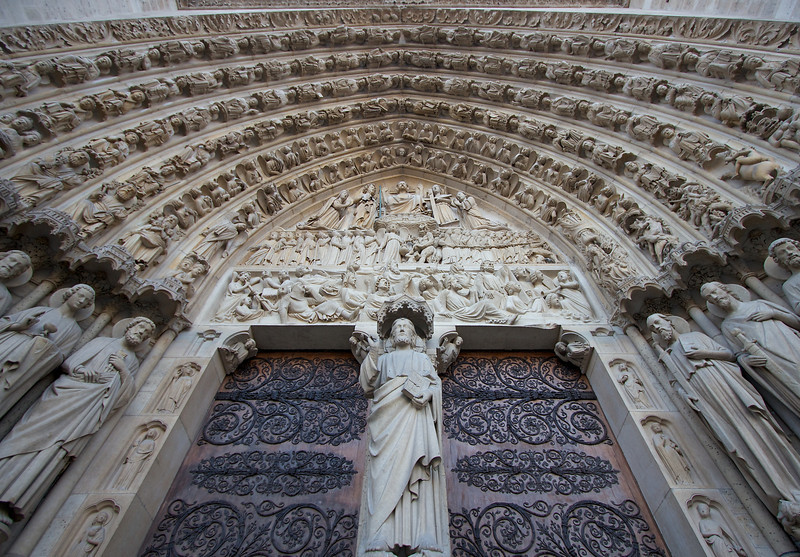 Standing outside the center of the west portal of Notre Dame, I had a strange feeling that a lot of people were looking at me in judgment. No wonder as this portal depicts the Last Judgment, originally sculpted between 1200 and 1240. Unfortunately many statues, particularly the large jamb statues (the first carved figures a visitor meets on a visit to a Gothic cathedral-traditionally depicting Old Testament prophets or martyred saints), were destroyed in the Revolution. During the major restoration campaign in the mid-1800s, Eugène Emmanuel Viollet-le-Duc restored the portal to its original state by replacing trumeau (a pillar in the center of a Gothic portal) and jamb statues. The trumeau shows Christ teaching. Just above Christ’s head is the lower lintel of the tympanum (a panel above a main portal, or doorway, usually heavily decorated) the Resurrection of the Dead. Here the dead emerge from their tombs at the sound of the angels' trumpets. Just above is the Weighing of Souls by the Archangel Michael, with a furry Devil's interference. To the right are the Dammed and to the left are the Redeemed. Above that in the tympanium is Christ in Majesty. Christ displays his wounds, flanked by angels. The kneeling figures are the Virgin Mary and St. John, who were present at the crucifixion. The right jamb figures features Apostles Paul, James the Great, and Thomas. The left jamb consists of statues of Bartholomew, Simon, and James the Less. Above the right jamb statues are interesting figures of the torments of the damned in hell. For much more detail, see Sacred Destinations and Norte Dame's website.

To get a unique perspective of the Portal, I used a wide angle lens with a focal length equivalent of 16mm positioned very close to the Portal, looking up. I did not do much work on the image, simply straightened it out using PTLens and cropped it so the right side matched the left side.