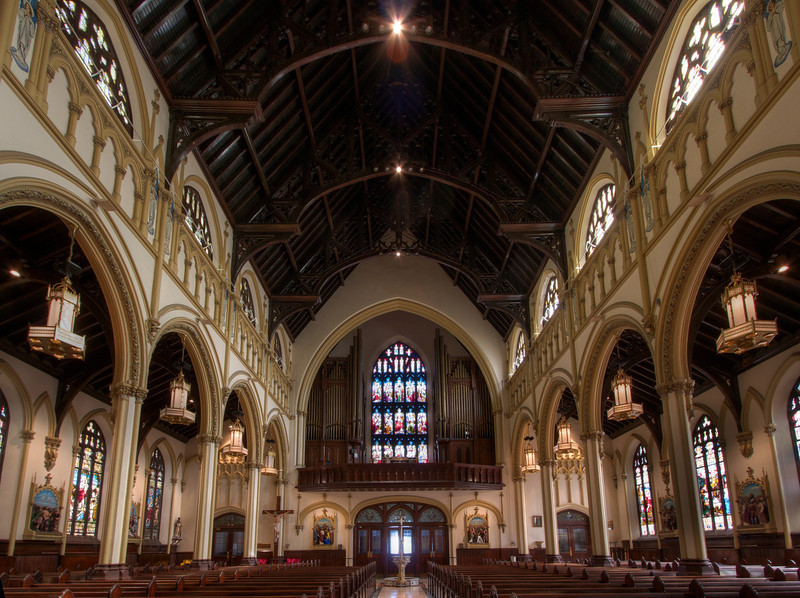 The Holy Name of Jesus is located at 96th Street and Amsterdam Avenue. The church was organized in 1868 in the then desolate Upper West Side of Manhattan. The population grew due to due to immigration and soldiers returning from the Civil War. Churches in the area were Saint Michael’s Episcopal Church, Saint Paul the Apostle, and Annunciation. In 1867, Catholics in the area (then called Bloomingdale) wanted a church in their own neighborhood. The Bloomingdale Catholic Association was formed. They raised money and bought a site at 97th Street. Thomas Henry Poole designed the current church. The Gothic Revival church was built in stages from 1891 to 1900. The Holy Name School opened in 1905. In the early days of the church, it served many immigrants, particularly Irish, Italian, Germans, and English, according to the church website.

The church underwent demographic changes after World War II as a large number of Spanish-speaking families moved to the neighborhood. Today, liturgies are celebrated in English, Spanish, and French every weekend.

In 1990, John Cardinal O’Connor, Archbishop of New York, invited the Franciscan Friars of Holy Name Province to assume the urban ministry at the church.

A striking feature of the 1,000 sear interior is the 60-foot English Gothic ceiling with dark brown hammer beams that support the wooden arches.