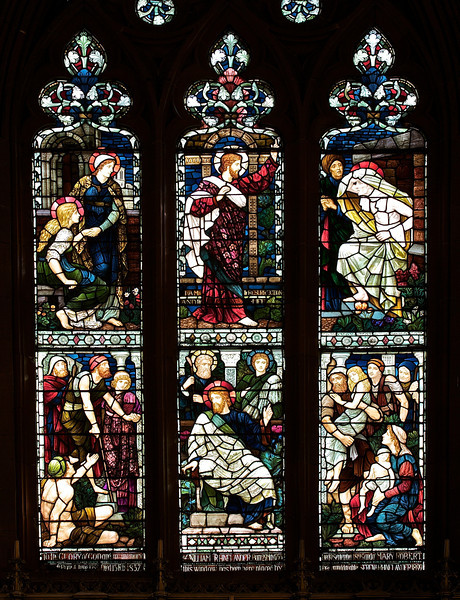 From the Holy Trinity website on The Central Chancel Window:

"Central Chancel Window - Events in the Life of Jesus

The Lower Panel shows The Healing of Bartimaeus - Jesus is shown in a crowd of sick people gathering around him and in the lower left corner is the blind beggar Bartimaeus.

Luke 18:36-43 and hearing a multitude going by, he inquired what this meant. They told him, "Jesus of Nazareth is passing by." And he cried, "Jesus, Son of David, have mercy on me!" Those who were in front rebuked him to be silent; but he cried out all the more, "Son of David, have mercy on me!" And Jesus stopped, and commanded him to be brought to him; and when he came near, he asked him, "What do you want me to do for you?" He said, "Lord, let me receive my sight." And Jesus said to him, "Receive your sight; your faith has made you well." And immediately he received his sight and followed him, glorifying God; and all the people, when they saw it, gave praise to God.

The Upper Panel is the Raising of Lazarus from the Dead

The upper panel tells the story of the raising of Lazarus who had been dead for 4 days before Jesus arrived. The body of Lazarus is seen coming out of the grave at the request of Jesus, while Mary and Martha, the sisters of Lazarus, look on in amazement.

John 11:40 Jesus said to her, "Did I not tell you that if you would believe you would see the glory of God?" So they took away the stone. And Jesus lifted up his eyes and said, "Father, I thank thee that thou hast heard me. I knew that thou hearest me always, but I have said this on account of the people standing by, that they may believe that thou didst send me." When he had said this, he cried with a loud voice, "Lazarus come out." The dead man came out, his hands and feet bound with bandages, and his face wrapped with a cloth. Jesus said to them, "Unbind him, and let him go"."