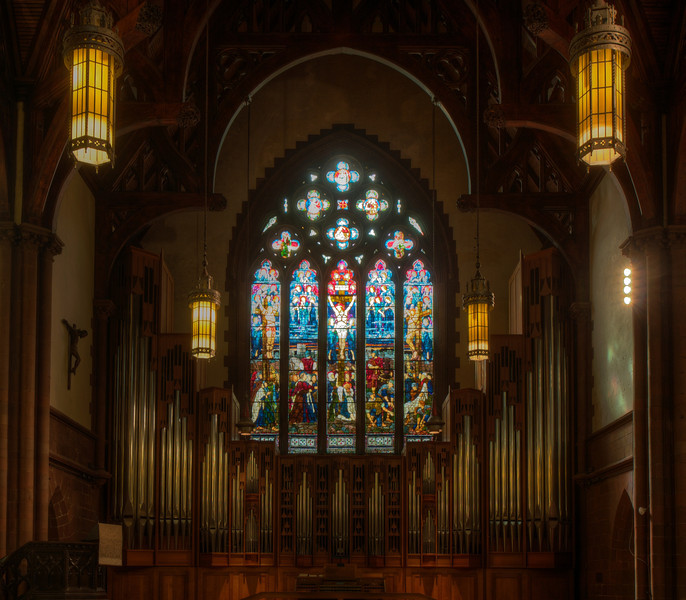 The pipe organ in the south transept was designed and constructed by Rieger-Orgelblau of Austria and installed in 1987. The company started in 1845 According to the company website.

From the Holy Trinity website on The Crucifixion south transept window:

"In the main panel Jesus is seen fixed to the cross with the two thieves who were crucified with him on either side. On the left side Mary Magdalene, Mary, the mother of Jesus and Solome, the mother of James and John. In the lower right hand of the picture a group of Roman soldiers are shown casting lots for the garments of Christ.

John 19:23 When the soldiers had crucified Jesus they took his garments and made four parts, one for each soldier; also his tunic. But the tunic was without seam, woven from top to Bottom; so they said to one another, "Let us not tear it, but cast lots for it to see whose it shall be." This was to fulfill the scripture, "They parted my garments among them, and for my clothing they cast lots."

The whole scene is surmounted by a host of angels praying and waiting to receive the soul of the crucified Christ.

In the tracery above the main portion of the window, there is a small window containing the symbol ìXPî, the abbreviation of Christís name in Greek. There are also four small cloverleaf windows which continue the story after the crucifixion. From the left to the right they portray Christ being taken down from the cross; Christ being placed in the he tomb; a soldier standing guard; and finally, Martha and Mary bringing spices for Christís body.

Matthew 27:57 When it was evening, there came a rich man from Arimathea, named Joseph, who was also a disciple of Jesus. He went to Pilate and asked for the body of Jesus; then Pilate ordered it to be given to him. So Joseph took the body and wrapped it in a lean linen cloth and laid it in his own new tomb, which he had hewn in the rock.

Matthew 27:65 Pilate said to them, You have a guard of soldiers; go, make it as secure as you can.î So they went with the guard and made the tomb secure by sealing the stone.

Mark 16:1 When the Sabbath was over, Mary Magdalene and Mary the mother of James, and Salome bought spices, so they might go and anoint him. And very early on the first day of the week, when the sun had risen, they went to the tomb."