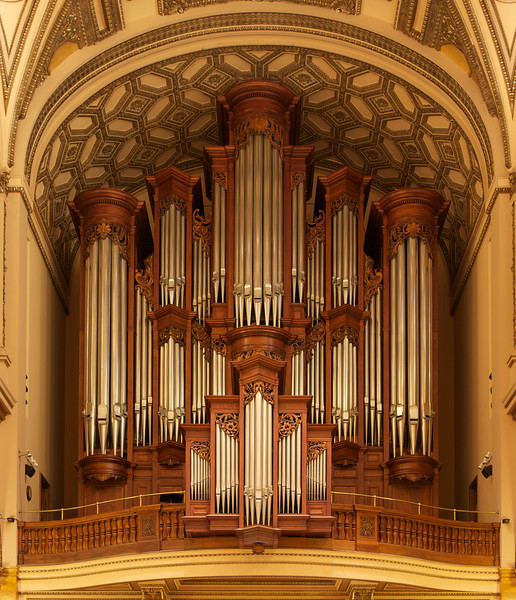 “The 68-stop four manual and pedal organ in the Church of St Ignatius Loyola, New York is the largest mechanical action ever to have been built by a British builder. It stands some 44 feet tall on the west gallery of this fine Manhattan church and took almost two years to build and install. This instrument embodies all the principles of excellence which are the hallmark of a Mander Organ. Based on the French Romantic organ of the mid nineteenth century, it has proved to have exceptional versatility. The case is an original design and is built of French oak from trees planted about the time of the Revolution. The sensitive suspended key action which employs purely mechanical couplers has delighted many organists.

I have played with the greatest pleasure the Mander of St Ignatius. Perfection in the building, incredible action, and above all, distinction in the voicing: this instrument is for me the most perfect medium.

High praise indeed from one who has played and recorded on numerous organs in the course of his long and distinguished career. This achievement has established Mander firmly at the forefront of organ building at the turn of the Millennium.

A masterpiece! An inspiration for the organist. The words of Prof. Ernst-Erich Stender, organist at Buxtehude's church, the Marienkirche in Lübeck

Very soon after its completion, this organ became widely acclaimed by organists from all over the world. The international recitalist Simon Preston wrote, It is difficult to do justice to this famous instrument in a couple of sentences; suffice to say that to look at this beautiful instrument is to know the sound that will come out of it.

David Briggs of Gloucester Cathedral wrote, A great treat to play this noble and versatile instrument. It has a refreshingly strong character-both visually and aurally.”