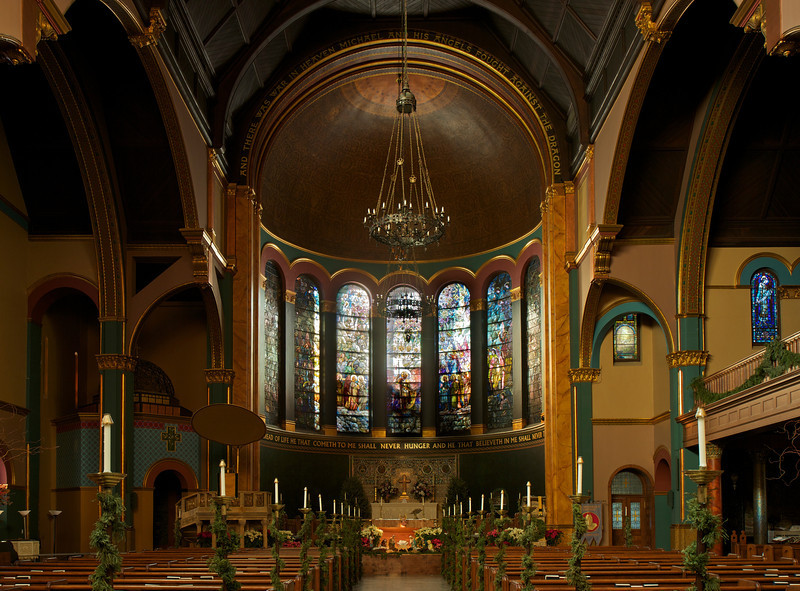 This photo, taken during the Christmas Season 2012, shows the white marble altar with the temporary manger scene below, the mosaic reredos above the altar, and the seven Tiffany stained glass windows. Other photos in this gallery provide more detail.

I summarized information on the history of Saint Michael’s Church from a pamphlet available in the narthex (entrance) of the church, “St. Michael’s Church: Two Centuries and Onward,” by church Archivist Jean Ballard Terepka.

Saint Michael’s is an Episcopal church at 99th and Amsterdam Avenue in Manhattan. The current church building is the third church on the site. Robert W. Gibson designed the current building, completed in 1891, in a Northern Italian renaissance or Romanesque-Byzantine style. Works by Tiffany Glass Studios founded by Louis Comfort Tiffany are prominent throughout the church.

The families that established Saint Michaels in 1807 were pew holders of Trinity Church seeking a more convenient place to worship near their summer homes overlooking the Hudson River. The location was in a village of Manhattan known as Bloomingdale and located on a hill on Bloomingdale Road, just east of what later became Broadway. The church served not only Trinity founders but also Bloomingdale farmers, shopkeepers, migrant, and temporary workers.

In 1820, William Richmond became rector, beginning a century-long family leadership. Richmond served for 33 years and was followed by his assistant priest, Thomas McClure Peters, who married Richmond’s daughter. McClure Peters total service in the parish lasted 40 years, with his son taking over as rector. Under William Richmond, the size of the scope of the ministry was significant extending from 59th street to the northern tip of Manhattan and from the Hudson River to the East River. Saint Michaels founded at least six churches in New York City.

Saint Michael’s was active in establishing ministries in the 19th century including the City Mission Society and numerous asylums for poor and homeless women and children, and foster care for destitute children. After the Civil War, the church provided space and financial support for the free Bloomingdale Clinic, District Nurse Association, Day Nursery, and Circulating Library.

The first church was a simple white frame building. It burned to the ground in 1853 and was replaced by a swiftly build second church consecrated in 1854.

Saint Michael’s grew rapidly during that time, welcoming many German immigrants. The second church now seemed inadequate in size and plans were put in place in the 1880s for a new building-the third and present building. Robert W. Gibson (1854-1927) created a church in Romanesque and Byzantine style and was dedicated in 1891. In 1895, Louis Comfort Tiffany (1854-1933) was commissioned to design the interior decorations for the building in addition to seven lancet windows representing Saint Michael’s Victory in Heaven.

The church struggled during the First and Second World Wars, barely able to maintain its social ministries while meeting the wartime pastoral needs of the parish. For the first 60 years of the century, the number of members at Saint Michael’s decreased as the Upper West Side experienced economic decay with the area considered dangerous and undesirable. In the late 1950s and 1960s, it retained a small core of devoted parishioners in the decaying neighborhood. Church leaders struggled to keep the church solvent with meager revenue from pledges and plate collections. As a result of the precarious financial condition, the Bishop of New York considered closing the church. However, funds were raised to keep the church open and even to install a new organ.

The Upper West Side experienced a revival in the 1970s as the neighborhood once again became desirable and Saint Michael’s welcomed a substantial number of new parishioners. Demographically, the church reflected the diversity of the Upper West Side with individuals and families of Caribbean, Hispanic, African, Indian Asian, and Caucasian descent. As a result of the growing numbers, the church’s finances improved and the church remerged as a leader in a renewed neighborhood. In 1997, Saint Michael’s Church became a Designated Historical Building on the National and State Registers of Historic Places.