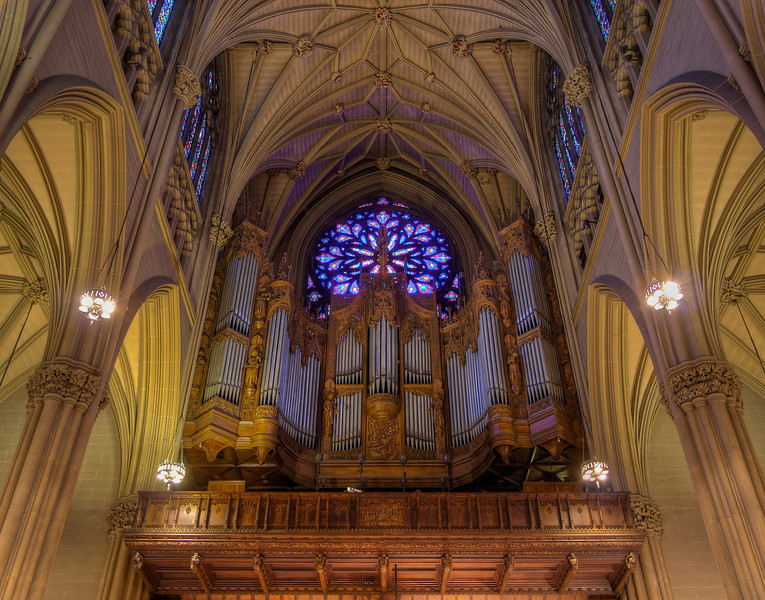 Saint Patrick’s has two organs with the Gallery Organ located below the Rose Window over the 5th Avenue entrance. According to the church website, plans were put in place to replace the original organ in 1927. After three years of work, the Gallery Organ was dedicated in 1930. The organ is adorned with angels and Latin inscriptions. A restoration project commenced in 1993. New consoles were obtained to replace the original ones that had deteriorated. In 1994, the hand-carved organ façade was cleaned, repaired, and oiled. The entire restoration was completed in 1995.

Charles Connick (1875–1945) was a prominent artist best known for his work in stained glass in the Gothic Revival style. He was born in Crawford Country, Pennsylvania and developed an interest in drawing at an early age. He left high school when his father became disabled to become an illustrator on the staff of the Pittsburgh Press. At the age of 19, he learned the art of stained glass as an apprentice in the shop of Rudy Brothers in Pittsburgh, where he stayed through 1899. He worked for a number of stained glass companies in Pittsburgh and New York. He went to England and France to study ancient and modern stained glass, including those in the Chartres Cathedral. His first major work was First Baptist Church in Pittsburgh in 1912. Connick settled in Boston opening a stained glass studio in Back Bay in 1913; the Charles J. Connick Associates Studio continued to operate after his death until 1986. He produced many notable windows in such churches as Saint Patrick’s Cathedral, Saint John the Divine, the Princeton University Chapel, and Saint Vincent Ferrer. According to Wikipedia, the Charles J. Connick Associates Studio produced some 15,000 windows in more than 5,000 churches and public buildings.

According to Wikipedia, “Connick preferred to use clear "antique" glass, similar to that of the Middle Ages and praised this type of glass as "colored radiance, with the lustre, intensity, and baffling vibrant quality of dancing lights." He employed a technique of "staggered" solder-joints in his leading and bars, which English stained-glass historian Peter Cormack says gives the windows their "syncopated or 'swinging' character." His style incorporated a strong interest in symbolism as well. Connick expressed the opinion that stained glass's first job was to serve the architectural effect and he believed that his greatest contribution to glasswork was "rescuing it from the abysmal depth of opalescent picture windows" of the sort popularized by Louis Comfort Tiffany and John La Farge. Although firmly committed to a regenerated handicraft tradition, Connick welcomed innovation and experimentation in design and technique among his co-workers at his studio.”

According to the Charles J. Connick Stained Glass Foundation website “Using pure, intense color and strong linear design, this guild of artists led the modern revitalization of medieval stained glass craftsmanship in the United States. Their work reflected a strong interest in symbolism in design and color, and stressed the importance of the relationship between the window’s design and its surrounding architecture. As if with one mind and one pair of hands, the craftsmen in the Connick Studio worked collectively on their windows like the 12th- and 13th- century artisans whose craft inspired them.”

Here is an interesting video from the Massachusetts Institute of Technology on Connick. In December 2008, the foundation donated materials to the MIT’s Rotch Library of Architecture and Planning to form the Charles J. Connick Stained Glass Foundation Collection.