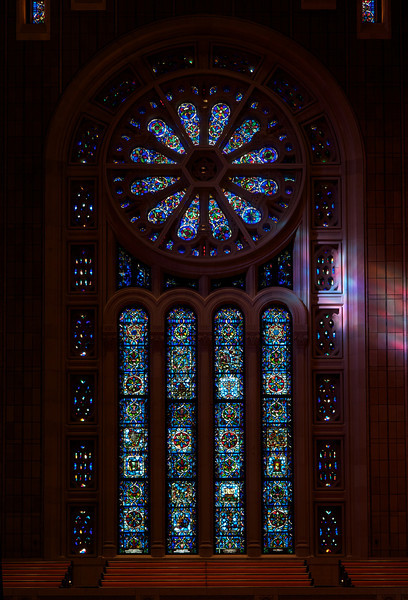 From a pdf file from the Temple Emanu-El website:

“Most prominent of the stained-glass windows featured on the sanctuary’s western façade is Oliver Smith’s rose or wheel window, which is replete with numerical strategies that are a subtext of Jewish mysticism. Emanu-El’s “signature” window is comprised of 12 panes (symbolic of the tribes of Israel) surrounding a six-pointed Magen David (or Star of David). Circling the rose are 36 small panes-36 being significant because of the Talmudic reference to 36 righteous men in each generation who are responsible for preserving the world; 36 also signifies “double life” in gematria (numerology of the Hebrew language and alphabet) because 2 X 18 = 36 and 18 is the numerical value of the Hebrew word chai, which means “life.” The rose window was donated to the congregation in honor of Babette and Mayer Lehman by their children, who included New York Supreme Court Justice Irving Lehman (a former Emanu-El president) and New York Governor Herbert Lehman (the first Jewish governor of New York).

Caai likewise is symbolized in the 18 marquis-shaped panes that arch around the rose and four lancet windows (each of which have 10 panes). The 18 panes of the arch may suggest the Amidah, our 18-part daily prayer. The seven windows located at the top imitate the seven-branched menorahs on the bimah. The center high window of the seven was donated to the congregation by Florette Guggenheim-widow of Benjamin Guggenheim (who died aboard Titanic), mother of arts patron Peggy Guggenheim and daughter of Joseph Seligman (a member of the Seligman banking family and a long-time vice president of the congregation.”

According to the Congregation Rodeph Sholom website, Oliver Smith was a master craftsman in the art of stained glass, most notably in the Arts and Crafts style. Smith’s studio was in Bryn Athyn, Pennsylvania as early as 1929, possibly earlier. His windows are at the Princeton Chapel, Princeton, New Jersey; Clothier Memorial Hall, Swarthmore, Pennsylvania; and Temple B’nai Brith, Los Angeles. Additionally, Smith’s paintings have been exhibited at the Corcoran Gallery of Art, Washington, D.C., the National Academy of Design and the Kennedy Gallery, both in New York City.