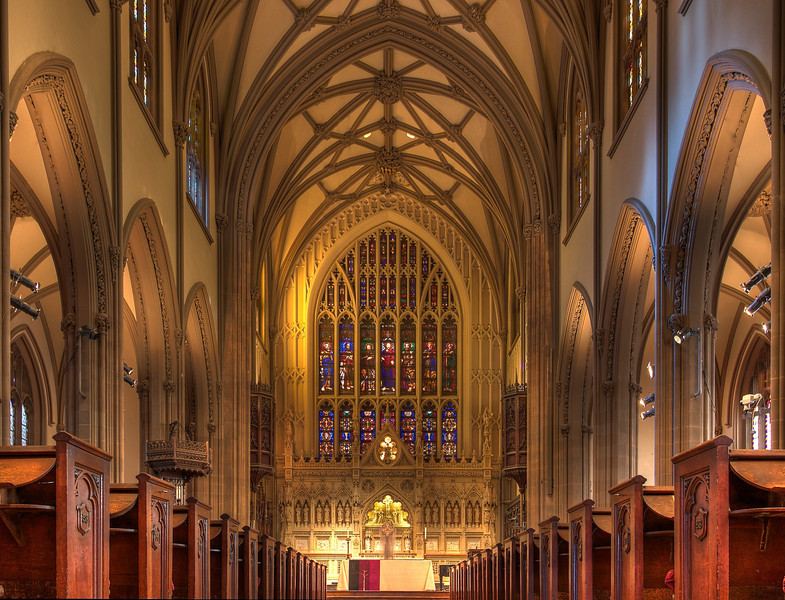 Trinity is an Episcopal church located near Wall Street in New York City. From the Trinity website, the history of the church begins in 1696 when a small group of Anglicans petitioned Governor Benjamin Fletcher for approval to purchase land for a new church. In 1697, the church received its charter from King William II and the first services were held in the new church in 1698. The church was destroyed by fire in 1776 stemming from a battle during which the British retook New York City. After the war, prominent Federalists church members included Alexander Hamilton, John Jay, and Rufus King. Construction on the second Trinity church began in 1788, but the structure was torn down in 1839.

The third and current church was competed in 1846. Architectural historians consider the present, 1846 Trinity Church building, designed by architect Richard Upjohn (1802–1878) a classic example of Gothic Revival architecture according to Wikipedia. Upjohn was an English-born architect who emigrated to the U.S. and became most famous for his Gothic Revival churches. He was partially responsible for launching the movement to such popularity in the United States. Upjohn, along with 13 other architects, co-founded the American Institute of Architects on in 1857. He served as president from 1857 to 1876. The Trinity website has a list of the hundreds of U.S. churches designed by Upjohn.

Upjohn is honored together with architect Ralph Adams Cram and artist John LaFarge with a feast day on the liturgical calendar of the Episcopal Church (USA) on December 16.

William Bradford, Robert Fulton, Albert Gallatin, and Alexander Hamilton are buried in the Trinity Church yard next to the church. See Trinity's website for more detail.