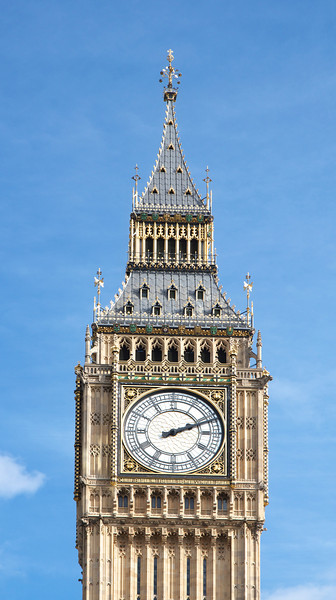 Big Ben is one of the most recognizable buildings in the world. The dials are about 23 feet in diameter and made from cast iron. Each dial contained 312 separate pieces of pot opal glass, which has an opaque finish.

A competition was held in 1846 to decide who should build the clock; however, the project was not completed until 1859. One reason for the delay was demanding standards for the clock put in place by Astronomer Royal Sir George Airy, who insisted that the first stroke of each hour must be accurate to within one second and the clock’s performance must be telegraphed twice a day to Greenwich Observatory. Edmund Beckett Denison, a barrister and a gifted amateur clockmaker was appointed to design the clock. Denison made many refinements to the clock including inventing the Double Three-legged Gravity Escapement. This was a revolutionary mechanism that enhanced the clock’s accuracy by ensuring that its pendulum was unaffected by external factors such as wind pressure on the clock’s hands. This invention has been used in many clocks worldwide.

The clock was installed in April 1859. However, the clock did not work because the cast-iron minute hands were too heavy. They were replaced by lighter copper hands and began keeping time in May 1859.

The Great Bell in the tower is known as Big Ben. Two candidates exist for the name’s origin: Sir Benjamin Hall, the First Commissioner for Works from 1855-1858 or Ben Caunt, a champion heavyweight boxer of the 1850s, with the first candidate more likely.

The first bell that was cast cracked. The second bell was lighter, but took 30 hours to winch to the top in October 1858. The bell rang for the first time in July 1859 but cracked in September 1859. In 1863 a solution was found by turning the bell a quarter turn so the hammer would hit in a different spot. Also the hammer was replaced by a lighter version and a small square was cut into the bell to prevent the crack from spreading.