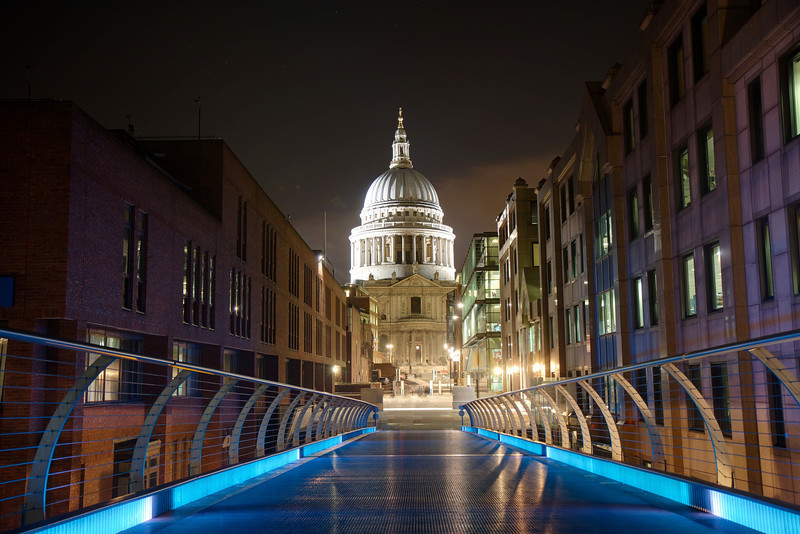 Millennium Bridge, a footbridge across the River Thames between Southwark Bridge and Blackfriars Railway Bridge, provides a spectacular view of Saint Paul’s Cathedral nested between two modern buildings and bridge supports. The church website has a photo on it’s opening page, which sparked my interest in capturing the cathedral at night.

Saint Paul’s is one of the most visible and notable sights in London, dominating the skyline at the top of Ludgate Hill, the highest point in the City of London. Noted architect Sir Christopher Wren designed the church in the English Baroque style. Wren designed more than 50 London churches after the Great Fire of 1666. The church was consecrated in 1697.

Herbert Mason’s photograph of the cathedral dome surrounded by smoke from German bombing during the Battle of Britain is an iconic image symbolizing Britain’s defiance of Nazi tyranny. The resilient church withstood the bombing; a German time-delayed bomb hit the cathedral in September 1940 and was diffused and removed by a bomb squad. According to Wikipedia, the bomb would have destroyed the church, as it left a 100 foot crater when later detonated in a secure location.

Important services held at St Paul's have included the funerals of Lord Nelson, the Duke of Wellington, Sir Winston Churchill, and Margaret Thatcher; Jubilee celebrations for Queen Victoria; peace services marking the end of the First and Second World Wars; the wedding of Charles, Prince of Wales, and Lady Diana Spencer, and the launch of the Festival of Britain, according to Wikipedia.